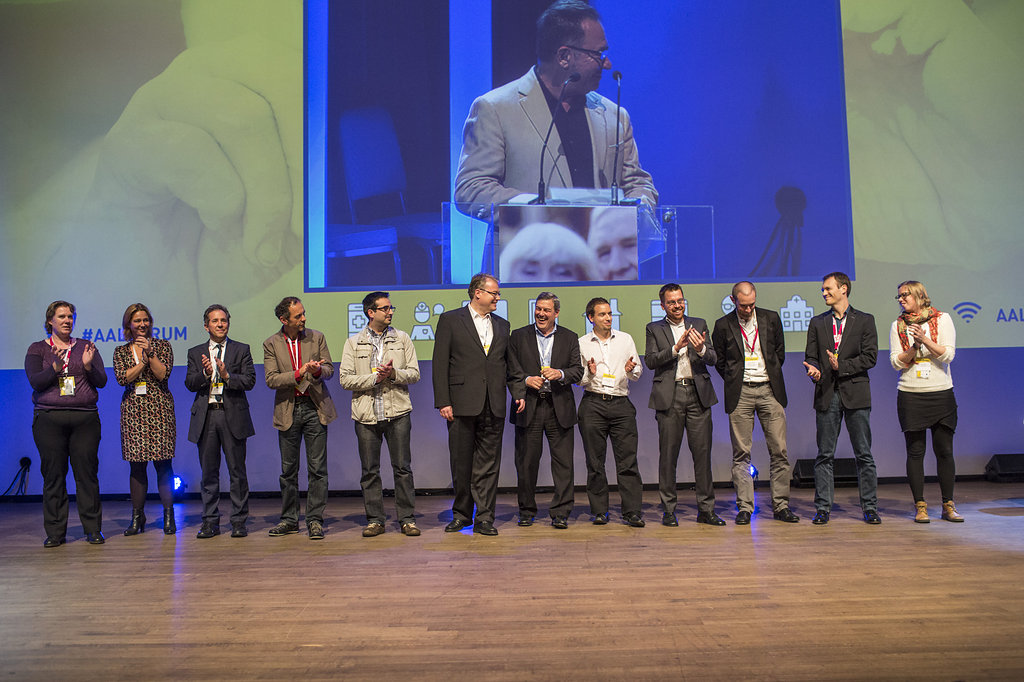 For the 5th consecutive year,  the AAL Award 2015 was one of the main highlights of the Forum. After the usual long selection process that started in May, three projects of the AAL Programme were invited to take part to the final phase in Ghent on 24 September 2015. The three finalists were selected by a jury of four experts who made a shortlist based on the degree of user-centredness, closeness to market and that of the novelty of the solutions.

This award was intended to recognize the most promising project of the Active and Assisted Living Programme that demonstrated great promise in terms of:

Each project had to present its goals and business case in a pitching style in front of the jury and of the audience. The first project presented was RelaxedCare a consortium led by the Austrian AIT and composed also of Swiss, Slovenian and Spanish partners.  RelaxedCare answers the question: “Is my mum doing fine right now”. It provides a new communication paradigm: being informed about the other’s well-being state and being able to send basic messages in an easy way. The well-designed RelaxedCare Cube is placed in the living environment of both the Assisted Person and the Informal Caregiver allowing them to stay connected worry-free. The RelaxedCare App is used by the Informal Caregiver when being mobile.

The second project to pitch was ChefMyself. Its main goal is to develop a customizable and extensible (ICT) service ecosystem built around an automatic cooking solution to support older people in preparing meals and maintaining healthy eating habits. The service provides advice on meal planning and grocery shopping, supports meal preparation through semi-automatic cooking, supports users on healthy eating, and provides a component of social interaction through activities such as recipe-sharing, developing a virtual social network. ChefMyself is a Spanish-led project led by Centemmsa, which is composed also by partners from Italy, Portugal, Poland and Netherland. Eurecat-Centemmsa is the major Technology Centre of Catalonia. It combines the experience of 450 professionals, generating an annual income of €38M and participating in over 100 national and international innovation projects.

VictoryaHome, which was the third project to pitch on stage, is a home platform that enables caregivers to be a daily part of their loved ones’ care no matter where they live. It lets them define their own care process, gives them actionable information, and then lets them take immediate action by making a virtual visit. The open platform allows to rapidly integrate and configure any new device according to particular care needs. 40 residents and over 100 caregivers are currently using and evaluating the VictoryaHome services in daily life. A plan is in place to commercialise at project completion, in Europe as well as in the U.S.  “Peace of mind is what this project is all about- said Ilse Bierhoff, Smart Homes, coordinator of the project.  Empowering caregivers and the elderly resident via instant presence, the possibility to build their own “network of care” and to define their own care process”. VictoryaHome is a consortium led by the Dutch Smart Homes, in collaboration with partners from The Netherlands, Norway, Sweden and Portugal.

After the presentations, which were given in plenary session in a pitch style (only 6 minutes to present the project idea and the plan for commercialization) the jury decided to award the project VictoryaHome with the following reasons: “The members of the jury were very impressed by the three projects and the quality of the presentations. They considered  all the detailed written information they had received about the  projects relating to the  competition criteria of value to the end user, level of innovation, and market potential.  The quality of the presentation was also taken into account.  After a long deliberation,    VictoryaHome  was selected as the winner. The jury felt that VictoryaHome demonstrated good user orientation, and showed a good case for being able to be introduced into care services.  It has been well tested, it is close to market, and there are well-developed business plans. The jury thinks that this project will successfully deploy into the growing market for service robotics.” The winner of this award will receive 5000 Euro to use for showcasing the project in investment contest.